Unlike the fiery caldera that erupted next to a gas platform in the Gulf of Mexico on Friday, Sunday’s explosion in the Caspian Sea appears to be of natural origin. The Seismological Service Center of the Republic of Azerbaijan said the towering jet of flames was the product of a mud volcano explosion, one of many in the region’s history.

The State Oil Company of the Azerbaijan Republic (SOCAR) said in a statement that none of its offshore facilities had been damaged.

Dr. Mark Tingay, a petroleum geomechanics specialist at the University of Adelaide, said in a Twitter message that the position of the fire could correspond to the site of the Makarov Bank mud volcano, which had a very similar explosion in 1958. Azerbaijan has about half of the world’s mud volcanoes, with hundreds of sites identified both on land and at sea. These features are often related to the presence of oil and gas deposits in the subsurface.

Mud volcanoes have two possible origins, according to Tingay: geothermal heat, such as the Yellowstone examples; or high pressure in sedimentary rock far below the surface, as in Azerbaijan. The effluent usually includes significant amounts of methane (natural gas), which means that an eruption can be accompanied by large fireballs.

In an update on Monday, a SOCAR spokesman reported that the company’s teams had identified the source of the explosion: the mud volcano on Dashly Island, an uninhabited outcrop in the Baku archipelago about 20 m offshore (and 45 m south of Baku). The site is about five miles from the SOCAR-operated gas platform in the Umid field. 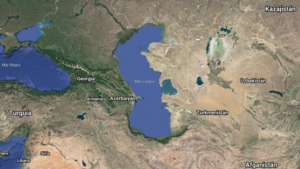 Drewry: Shipping lines aim for $100 billion in profits and are prepared for challenges ahead

British surveillance over the Gulf of Guinea

U.S. Navy in controversy with Russia