Mega container ship MV Ever Given blocking the Suez Canal

A large container ship has run aground and blocked shipping traffic in the Suez Canal.

AIS data shows that the MV Ever Given is stranded sideways towards the southern end of the canal near Suez (Egypt), blocking the passage of ships in both directions, due to strong winds that hit the mega container ship. Several tugboats have been on the scene for several hours working to dislodge the vessel. 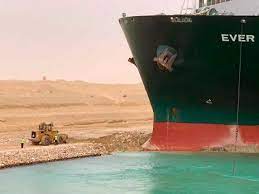 Shipping agent GAC reports that the grounding occurred at 7:40 local time on Tuesday (March 23) at kilometer 151, after the vessel suffered a power outage during transit.

The Ever Given had apparently just begun its transit of the waterway as part of a northbound convoy when the incident occurred.

“The 199,489 GT vessel was the fifth in the northbound convoy. None of the vessels ahead of her were affected, but the 15 vessels behind her were held in anchorages awaiting clearance of the Channel. The southbound convoy was also blocked,” the CAG reported.

At 400 meters long and just over 20,000 TEU capacity, the Panama-registered MV Ever Given is one of the largest “mega-ships,” also known as ultra-large container vessels (ULCVs), currently in operation.

The MV Ever Given is bound for Rotterdam from China.

This grounding is reminiscent of other UCLV groundings in recent years. In February 2016, the CSCL Indian Ocean, a 19,100 TEU, 399-meter-long containership, was stranded for five days after running aground in the Elbe River near the port of Hamburg. Up to 12 tugboats were needed to refloat the vessel. In another incident in the Suez Canal, the 21,000 TEU OOCL Japan ran aground in 2017 after a mechanical failure, but was refloated within hours and its impact was minimal.

“About 16 million 20-foot containers (TEUs) were carried by vessels from Asia to Europe and the Mediterranean in 2020, down slightly from 16.6 million TEUs in 2019 due to the COVID-19 outage in the second quarter, but the vast majority of that cargo is transported through the Suez Canal,” commented Greg Knowler, senior European JOC editor for IHS Markit. 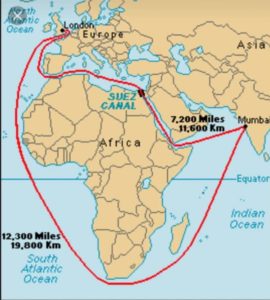 Knowler adds that, with the Asia-Europe supply chain already stretched to the limit, the Suez Canal blockage comes at a particularly inopportune time, as container shipping lines have already deployed all available vessels to meet the high demand from European and British importers. Even a short delay can exacerbate supply chain disruptions.

“One option for shipping lines is to reroute ships around Africa and the Cape of Good Hope, but that will add more than 3,000 nautical miles and another week to the transit time from Asia to Europe. Ships will also have to speed up to maintain their weekly schedules, and an increase of 2 knots for five extra sailing days will burn an additional 1,000 tons of fuel,” Knowler said.

The Ever Given’s manager, Bernhard Schulte Shipmanagement, has issued the following statement:

“Bernhard Schulte Shipmanagement (BSM) is responding to a grounding incident involving its managed containership EVER GIVEN (IMO: 9709257) that occurred at around 05:40 UTC on March 23, 2021 in the Suez Canal as the vessel was en route to Rotterdam, the Netherlands.

“All crew are safe and accounted for. There have been no reports of injury or pollution.

“BSM has made the necessary notifications to the relevant authorities and interested parties.

Further information will be provided when there are material developments.”

Tugboats work to refloat MV Ever Given blocking the Suez Canal