Tugboats work to refloat MV Ever Given blocking the Suez Canal

The shortest sea route between Europe and Asia remains blocked as a group of tugboats struggle to free one of the world’s largest container ships after it ran aground in the Suez Canal.

The 400-meter, 224,000-ton Ever Given ran aground Tuesday morning after losing steering capacity amid high winds and a dust storm, the Suez Canal Authority (SCA) said in a statement.

About 30% of the world’s container ship traffic passes through the canal each day, carrying everything from fuel to consumer goods. The main alternative route for ships traveling between Asia and Europe, around the African cape, takes a week longer to sail.

Images posted on social media appear to show the ship positioned diagonally across the canal, blocking its entire width. Photos shared by the SCA showed an excavator removing soil and rocks from the channel bank around the ship’s bow. 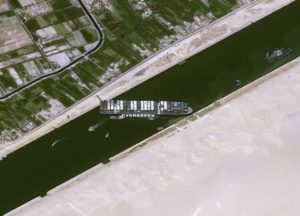 The SCA chairman told local media that despite the blockage, a southbound convoy was underway and that the authority was trying to keep traffic flowing between holding areas as best it could while salvage work continued.

About 12% of world trade by volume passes through the canal, and it is a major source of foreign exchange for Egypt.

Tracking maps indicated that the ship had run aground on the southernmost stretch of the waterway, between the Great Bitter Lake and the Red Sea port of Suez.

At least 30 ships were stranded north of the Ever Given, and three to the south, local sources said. Several dozen ships could also be seen clustered around the northern and southern entrances to the canal.

The SCA said it was trying to rebalance the ship, and local sources said efforts could be directed at digging the ship out if tugboats could not free it.

Dutch maritime services company Boskalis said its subsidiary Smit Salvage had been contracted to assist in the operation and was sending 10 people to Egypt.

In such cases, “you have to do the calculations to know how far aground it is and how much force you can exert without damaging the vessel,” said Boskalis spokesman Martijn Schuttevaer. 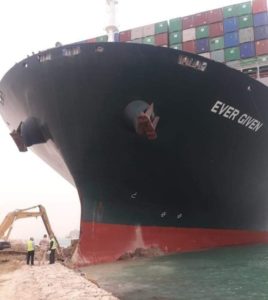 Bernhard Schulte Shipmanagement (BSM), the vessel’s technical manager, said the Ever Given had run aground in the channel at around 05:40 GMT on Tuesday. He said an investigation was underway.

BSM, which is in charge of the crew and technical aspects of the ship, said all crew were safe and there had been no reports of injury or pollution. It said it had notified the authorities but could not confirm the ship’s owner.

Taiwan’s Evergreen Marine Corp, which charters the vessel, said it had been told by the owner that the ship “was suspected to have been hit by a sudden strong wind, which caused the hull to veer out of the waterway and accidentally hit the bottom.”

The ship was likely insured for about $100 million, said Marcus Baker, global head of marine and cargo at insurance broker Marsh in London.

As of Wednesday, five tankers loaded with liquefied natural gas had been unable to pass through the canal because of the stranded container ship, according to data intelligence firm Kpler.

Of the five, three were bound for Asia and two for Europe, said Kpler analyst Rebecca Chia. She said if the congestion persists through the end of this week, it would affect the transit of 15 LNG carriers.

“It increases the risk that we could see additional port congestion in European ports in the coming week,” said Lars Jensen, managing director of SeaIntelligence Consulting.

Mega container ship MV Ever Given blocking the Suez Canal