After continued calls to add dockworkers at the ports of Long Beach and Los Angeles to the priority groups for the COVID-19 vaccine, California authorities agreed and released the first batch of vaccine for front-line workers to ensure cargo continues to flow through the ports. 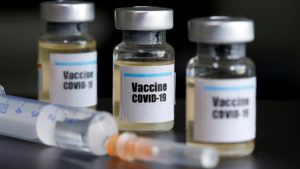 Despite a shortage of the vaccine that has forced the suspension of operations at some of California’s mass vaccination centers, Long Beach was able to allocate the vaccines to people working at the ports as of Feb. 12.

The Long Beach Department of Health and Human Services confirmed that it organized the clinic to supply 800 doses of the Moderna vaccine to dockworkers.

Longshore workers were added to priority groups that have included frontline workers in the medical profession, senior citizens and recently expanded with other segments including teachers.

The International Longshore and Warehouse Union, which represents people working on the docks, told Reuters that appointments filled up in just 20 minutes.

They cited the vital role members have been providing since March to ensure the flow of goods through the dual ports and the interaction needed to complete their duties at the port.

In mid-January, ILWU officials told the Los Angeles Times that 694 members had tested positive for the virus and 12 members had died from it.

Union officials also reported alarming percentages of positive tests among employees at both ports and said hundreds of people had been furloughed for fear of being exposed to the virus while working.

With the growing backlog of ships waiting in San Pedro Bay for terminal space, which is blamed in part for the virus, fears were growing that the ports did not have the number of workers needed to keep up with the volume.

Elected officials, unions and port executives had joined together to ask the state to put longshoremen on the list of front-line employees to ensure they could receive vaccinations as soon as possible.

The Los Angeles City Council had also passed a resolution calling on the mayor to vaccinate dockworkers.

Los Angeles health officials were sympathetic to the concerns, acknowledging reports of the community spread of the virus within the ports and its potential impact on operations.

They also recognize the essential nature of the work performed by port employees to maintain commerce throughout the region, but their hands were largely tied by the state prioritizing groups for vaccination.

In addition, having experienced a surge in the virus in recent weeks, Los Angeles, like most of the United States, was facing a shortage of the vaccine that required the federal government to increase distribution to the hardest hit areas.