The operating margin of shipping lines in decline

According to Alphaliner, seven of the largest shipping lines saw their operating margin decline in the second quarter of 2022 after the lines were hit by a combination of falling spot rates, rising costs and weaker demand.

According to the report, on average, the industry reported an operating margin of 56.3% for the quarter, down from 57.4% in the first three months of the year.

The margin had previously increased in the first quarter after the Shanghai lockdowns depressed results in the fourth quarter, adds Alphaliner.

COSCO, Evergreen and Maersk Ocean (the group’s container business plus limited terminal and bunkering activities) were the only top ten carriers to report an increase in their margin in the latest period, with COSCO in particular posting a significantly better performance. than in the previous quarter, reports Alphaliner. 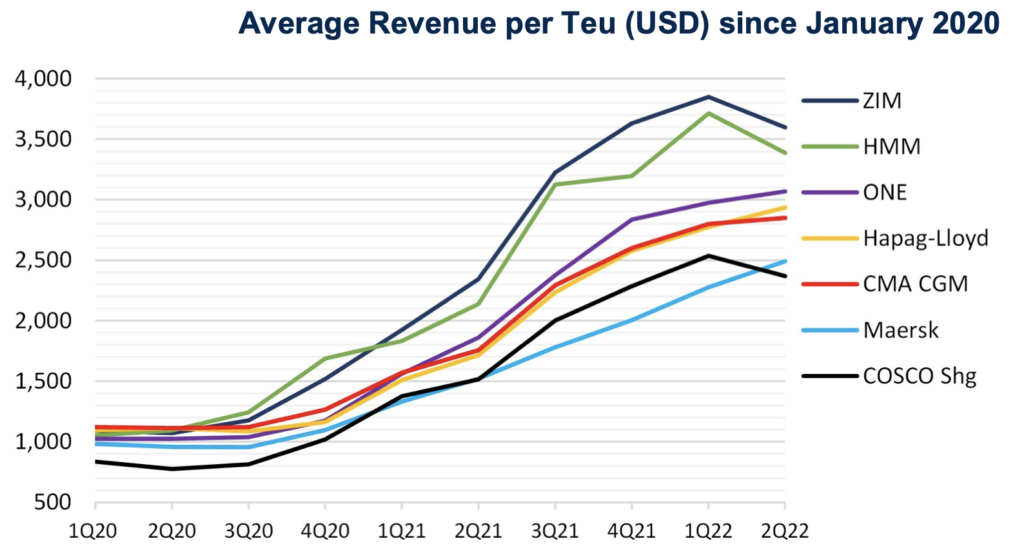 Average Revenue per Teu (USD) since January 2020 Source: AlphalinerThey add that the remaining seven lines saw an effective decline or plateau in their margins, with ZIM and Wan Hai Lines posting the largest drop of more than 60% to the low 50s. However, in a historical border context, levels remain extremely high.

Despite the general decline in margins, most carriers reported higher (or even record) quarterly operating profit (EBIT) in the second quarter.

Maersk and Hapag-Lloyd posted a 9% and 5% increase in average revenue per teu, respectively, compared to the previous quarter, to $2,491 and $2,935, boosted by their lucrative contract business.

Conversely, they add that smaller carriers with high spot exposure, particularly on the transpacific, which had previously seen their profits rise rapidly, were punished in the latest quarter when average revenue per teu fell sharply.

HMM and ZIM reported average revenue per teu of $3,387 and $3,596 respectively for the quarter, down almost 9% and 7% from the previous three months.

As long as contract rates remain intact, the industry is likely to see a growing two-tier market, differentiated by those carriers who have signed long-term contracts at high rates and those who rely on the weakening spot market, it reports. Alphaliner.

Meanwhile, the article shows lower margins even for those carriers that reported higher profits in the period pointing to an increase in industry expenses, a fact highlighted last week by CMA CGM.

The French airline’s operating costs rose by more than 22% year-on-year in the second quarter after it posted higher charter, port and especially bunker costs.

For the latter, the line paid $1.1 billion more for bunkers in the first half of 2022 on a comparable consumption basis than in the same period in 2021, Alphaliner concludes.