Vessel congestion outside the busiest U.S. gateway for trade with Asia persisted over the past week as imports surged into March, normally one of the slowest months of the year for container volumes.

A total of 25 container ships were at anchor waiting to enter the neighboring ports of Los Angeles and Long Beach, California, as of Sunday, up from 28 the previous week, though still down from a peak of 40 in early February, according to officials overseeing shipping traffic in San Pedro Bay.

Another 10 are scheduled to arrive over the next three days, with seven expected to drop anchor and join the queue. 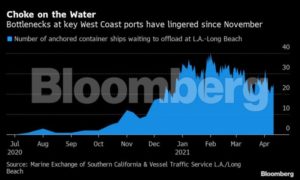 According to the Port of Los Angeles, the average wait for a berth was 8 days, unchanged from the previous week. That’s nearly triple the November average delay.

Last week, the Port of Long Beach reported that it handled the equivalent of 840,387 20-foot containers in March, surpassing the volume recorded in December and making it its busiest month ever.

According to Lars Jensen of Sea Intelligence Consulting, “the situation for both terminals and intermodal is not improving substantially compared to a couple of weeks ago.”

He also assured that “There is only a marginal reduction in the queue outside Los Angeles/Long Beach to 23 ships waiting, and the queue in Oakland is now even longer than that on the east coast Los Angeles/LB still looks good, except savannah where the queue is only reducing very slowly.”

“The problem still persists for intermodal as well.”

“The chassis situation is slowly improving, but still suffers from shortages,” Jensen added