Six Russian officers from the unit 74455 of the GRU, a military intelligence agency that belongs to the armed forces, have been charged, by the US Justice Department, in connection with worldwide hacking attacks, including the NotPetya ransomware offence that penetrated Maersk’s IT systems in June 2017, attack that cost the container line hundreds of millions of dollars in lost revenues.

The NotPetya attack resulted in cargo left on quaysides, disrupted booking services, the shutdown of several ports of Maersk’s terminal operator APM, including its facility in Rotterdam, while empty containers needed repositioning.

Justice Department officials said yesterday the Russian attacks were the “single most disruptive and destructive series of cyberattacks ever attributed to one group”.

Six men aged between 27 and 35 have been placed on the FBI’s wanted list following yesterday’s Justice Department news conference. 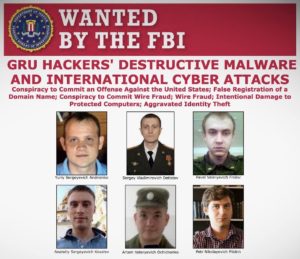 “No country has weaponised its cyber capabilities as maliciously and irresponsibly as Russia, wantonly causing unprecedented collateral damage to pursue small tactical advantages and to satisfy fits of spite,” assistant attorney general John Demers said in announcing the indictment.

“The FBI has repeatedly warned that Russia is a highly capable cyber adversary, and the information revealed in this indictment illustrates how pervasive and destructive Russia’s cyber activities truly are,” added Federal Βureau οf Ιnνestigatiοn (FBI) deputy director, David Bowdich.

As alleged, the conspiracy was responsible for the following destructive, disruptive, or otherwise destabilising computer intrusions and attacks:

For more information on cyber attacks in the maritime industry, watch:

VIDEO: Controversy over environmental risk of ship with oil from Venezuela

Container shipping: Record carrier profits could be here to stay