COLOMBIA: The way for the deep water port in Barranquilla is cleared

The way for the deep water port in Barranquilla is cleared.

SEMANA – Barranquilla Mayor Jaime Pumarejo Heins told SEMANA that a memorandum of agreement has already been signed that gives a big boost to the project and among the participants is the company Power China, one of the world giants in infrastructure works.

Rodney Castro, manager of the Bocas de Ceniza Port Society (SPBC), who has led the project, said that the information has been handled with caution so that expectations this time go according to safe development.

They are in the final stage of work tables involving the Mayor of Barranquilla, Cormagdalena, several international firms (including China) and local port concessionaires.

Furthermore, there is a good chance that the national government will be linked through the Ministry of Transport.

“The idea is to explore the option of changing the physiognomy of the deepwater superport or port and becoming a mixed economy one with public participation. The signed document that will route the participation of each of the participants could be made public soon, ”Castro explained.

What is relevant here is that after many years of talking about the subject, the project now presents significant progress.

The projection is that it will be an integrationist port, that may have the current local ports as specialized and accessories of the Superport, that is, inclusive with the current actors.

“The remarkable thing is that Mayor Pumarejo made the commitment during his campaign and has fully carried it out, because he put people of the highest level so that the project can progress,” said Castro.

In 2018, Power China was ranked number 41 among the top 500 companies in its country, sixth in the list of the 250 largest global contractors, and second among the top 150 engineering design companies.

It has participation in projects such as the Doha airport in Qatar.

In Colombia, Power China was part of one of the consortiums that participated in the bid to stay with the work of the Bogotá metro, which was finally in the hands of APCA Transmimetro, made up of two other Chinese state companies, China Harbor Engineering Company Limited ( CHEC) and Xi’an Metro Company Limited.

The development of the Barranquilla Superport is projected on an initial land of 104.5 hectares, of the 815 concessionaires.
This would include four terminals, one for containers, one for general cargo, and two more for liquid bulk and solid bulk.

The port will have the double condition of sea and river port. And it will be able to receive the largest ships in the world with its 20-meter draft (double the current capacity).

Its storage capacity could cover three times what is currently produced in the Barranquilla port sector.

The projection is that it will generate 2,000 jobs, between direct and indirect. 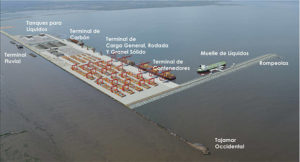 The history of the superport accumulates several failed announcements, hence the importance of progress.

The first agreement was signed in August 1998 between the General Superintendence of Ports and the Sociedad Portuaria Bocas de Ceniza S.A.

The 023 concession was to be handed over in 30 years for the temporary and exclusive use of the beaches, low-water areas and accessory areas, in the western cutwater of the Magdalena River, at the height of kilometers 5 and 6.

The dredging works were due to start in July 2007, but the design consulting firm found that the concession area was crossed by a submarine fiber optic cable from the Columbus Network company, which hindered these works. The process to achieve retirement took five years.

In 2013, after a market study, it was determined that the project should change its initial vocation from a coal port to a multipurpose port.

In 2015 Cormagdalena approved the change and authorized the director of that body to sign a letter to go from an initial project of $ 55 million to another of $ 870 million. Thus, the environmental concession and license were extended until 2055.

The manager Rodney Castro said that to date “the company has disbursed twenty million dollars in the pre-operational stage in order to be ready to start the infrastructure works.”

VIDEO: Managing Ships and Crew During a Pandemic Covid-19

WMU: Actions for the recovery of Global Ports