Splash247 – Hundreds are now presumed dead and more than 300,000 people have been made homeless from the blast, which was so large it was felt on the island of Cyprus more than 200 km away.

Sixteen Beirut port officials have been detained, while Igor Grechushkin, the owner of the abandoned Rhosus general cargo ship that originally brought the deadly ammonia nitrate to Lebanon in the first place, has been questioned by Cypriot police following a request by their Lebanese counterparts. The ship was found to have many deficiencies when it called at Beirut seven years ago and was detained, and subsequently abandoned by its owner, at which point its dangerous cargo – used to make both fertiliser and bombs – was moved into a warehouse in the port. 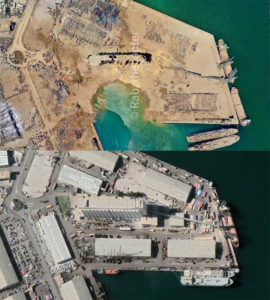 Among the confirmed dead from the gigantic fireball is an employee of CMA CGM. The French liner group’s Beirut office was destroyed in the blast on Tuesday evening.

Concern is also growing about ammonia nitrate storage at other ports around the world.

The full scale of the accident is still being pieced together. Compared to the 2015 ammonia nitrate explosion at Tianjin port, which until Tuesday was believed to be the largest, most costly port accident in peacetime, Beirut port had three and a half times the amount of the explosive substance stocked in one warehouse three days ago compared to when the northern Chinese port suffered its own dramatic series of explosions on August 12 five years ago.