According to Alphaliner, we bring you the Top 20 handling volume in teu per port during the first half of 2022 and its comparison with 2021: 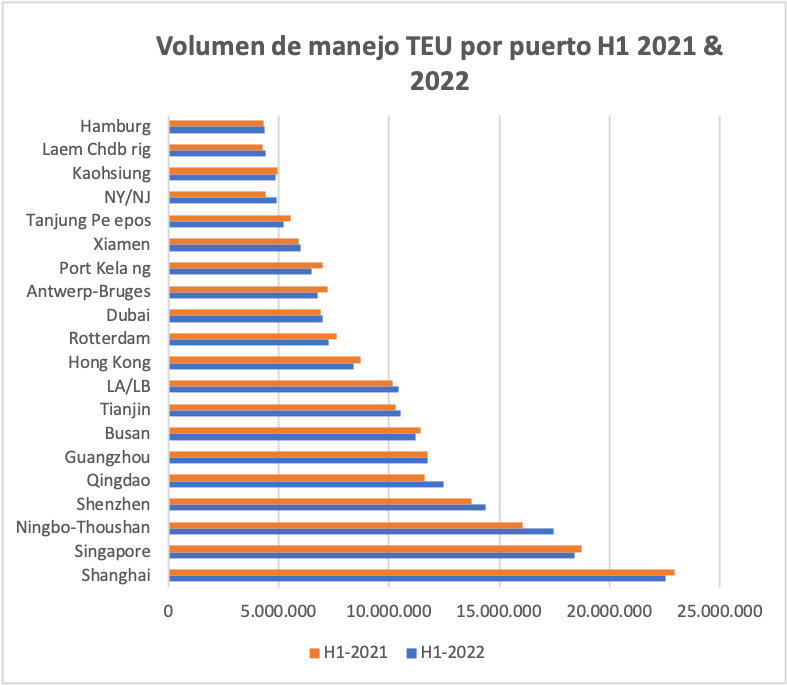 The gap between the two ports narrowed to 1.08 Mteu in the first six months of 2022, down from 2.7 Mteu in the same period a year ago and 4 Mteu before the pandemic. In fact, Ningbo-Zhoushan even overtook Singapore in the second quarter, although the numbers were undoubtedly boosted by the extraordinary Shanghai lockdowns in April and May.

Ningbo-Zhoushan has benefited from restrictions in its lockdown-hit neighbor Shanghai, with many shippers diverting ships to avoid delays and problems with road transport. However, the port continued to grow in July, at 3.28 Mteu, up 26% from a year earlier, even as volumes picked up in Shanghai.

Overall, Shanghai posted a 1.8% drop in the first half of the year, while Ningbo-Zhoushan posted nearly 9% growth.

There were no new entrants to the top 20 during the period, although growth at individual ports varied widely. This ranged at the low end from –7.4% in Port Kelang to +11.6% in New York/New Jersey at the top.

For once, Shanghai failed to extend its lead over Singapore during the period, a factor in 2021, with both ports posting similar year-on-year declines of around 2%.

In Europe, figures for Antwerp were distorted by the port’s merger in April with Bruges and Zeebrugge. The combined entity Antwerp-Bruges recorded a container throughput of 6.77 Mteu in the first half, or a decrease of 6.2%.

This was in contrast to Hamburg, which posted a smaller 0.9% growth, but slipped down the ranking after volumes grew 4.1% in Thailand’s Laem Chabang.

Overall, Qingdao, Dubai and Antwerp-Bruges moved up one place in the rankings, while Guangzhou, Hamburg and Port Kelang lost ground, the latter by two notches.

China’s eight ports accounted for 53% of the total throughput of the top 20 ports in the period, a figure that is likely to rise further as the country funnels traffic to a smaller number of hub ports.

As of July, Ningbo-Zhoushan had 301 container services calling, while July marked the fourth consecutive month that its throughput exceeded 3 Mteu.

More generally, the continued growth of ports, albeit modest, contrasts with the drop in shipping volumes seen this year.

Increased transshipment activity may be partially distorting the growth figures, as diverted cargoes due to port congestion eventually create additional loading and unloading movements that are not indicative of actual volume growth on a specific trade lane.

Contraction of the shipping industry