STENA IMPERO: conflict of interest between its flag and its crew

Today we share an interesting CNN opinion article about the conflict of manning of a vessel, victims of political and commercial disputes between countries. Stena Impero, a British flag vessel (flag country) owned by a Swedish company, was captured by Iran last week. Caught in the middle is the crew (23) that have nothing to do with any of the three countries.

The current crisis in the Strait of Hormuz has highlighted the murky world of international maritime transport, where shipowners can register and re-register their vessels in minutes, turning their crews into pawns into a diplomatic chess game.
“If you have a credit card and you have 15 minutes, you can re-register your ship with the flag you want,” said Michael Roe, professor of maritime and logistics policy at the University of Plymouth to CNN.

According to maritime laws, each merchant ship must be registered in a country. While the UN Convention on the high seas says that a ship must have a “genuine” link to its flag state, current rules allow ships to navigate under almost any flag, regardless of ownership, provided they pay the registration fee This is known in the shipping industry as a “flag of convenience.”

Approximately 40% of the global fleet is registered in Panama, Liberia and the Marshall Islands, three countries that together have only 169 ships in the country, demonstrating the common practice.

Registration decisions are mainly due to business reasons. For example, “One way to reduce costs is to choose a flag like Mongolia,” Roe said. “It has no coast, no ports, no real direct relevance to maritime transport, but it offers a flag that is cheap and low standards, so it is good for shipowners.” According to the United Nations Conference on Trade and Development, 265 ships with a total cargo capacity of 664,000 tons are sailing under the Mongolian flag.

It works in reverse too. Greece, a shipping superpower that owns the largest fleet in the world, sails most of its ships under a foreign flag because shipowners want to avoid the high tax rates of Greece. Having a large flag is prestigious, but also lucrative, so countries compete fiercely for ships to register with them.

“It’s quite common for shipping companies to look for a flag that suits them,” said Richard Coles, principal investigator at the Maritime Law Institute at the University of Southampton.
Coles, a long-time shipping lawyer, said the term “flag of convenience” is considered somewhat derogatory in the shipping industry because according to international conventions, each ship must comply with common safety, environmental and environmental standards. Labor, regardless of their flag.

“Here is the problem,” Coles said. “A vessel with a British flag or an American flag, these are flag states that rigorously enforce their safety rules, while if you have a small Caribbean island that does not have a great civil service and the means to enforce the rules, obviously, the standards are probably not that good, “he told CNN.

But the decision of the flag can have a great impact on the crews. Stena Impero, the Swedish-owned oil tanker that was seized in Iran last week, was probably attacked because it was flying the British flag. Iran captured the ship as an eye for an eye after its own oil tanker was arrested in Gibraltar because it was transporting Iranian oil to Syria in violation of EU sanctions. 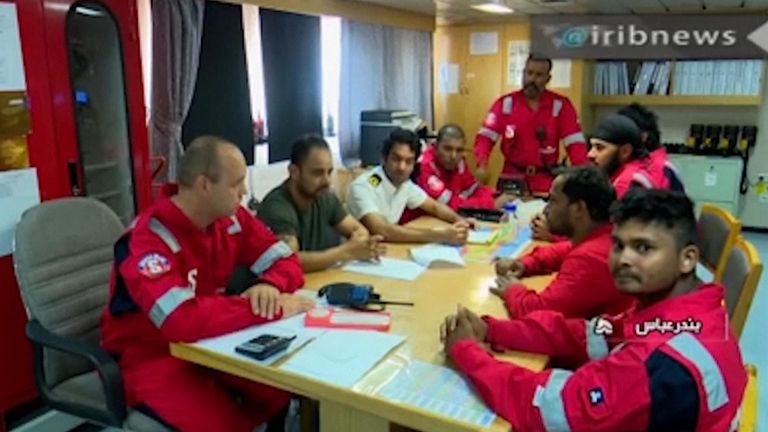 The crew aboard Stena Impero comes from India, the Philippines, Russia and Latvia, countries that are mostly not involved in the current dispute between the Iranians and the West.
It is a fairly typical reality: India, Russia, and the Philippines are among the top five countries with the largest number of sailors.

David Heindel, president of the seafarers’ section of the International Federation of Transport Workers (ITWF), said the risks that the risks faced by crews in the Strait of Hormuz are “totally unacceptable.” The ITWF has been campaigning against flags of convenience for decades, saying the practice puts crews at risk of exploitation.

When a ship is registered in a country, it assumes its nationality and is governed by the laws of that state. In return, the country is theoretically responsible for the ship and its crew regardless of their nationalities.

He also states that it is really difficult to get help from the flag state for non-citizen sailors. That is especially true when the flag belongs to a developing country with little diplomatic power and no real labor protections.

At the same time, Heindel mentions, that the diplomatic missions of the seafarers’ countries themselves cannot help either. It may be its citizens who are involved but have no power over the ships. To complicate matters further, ships can change flags and re-register as they wish, even halfway. In a war, security becomes a concern and “re-flagging” could provide better opportunities for a ship.

Insurance can also play a role. Lloyd’s List, a maritime news newspaper, reported last week that war risk insurance costs for British-flagged ships have increased tens of thousands of dollars per trip since the capture of Stena Impero, which encourages the owners to leave the UK flag.

British flag tanker Stena Impero and his 23 crew members were captured by Iran.
According to Stena Bulk spokeswoman, owner of Stena Impero, the British and Swedish governments are leading diplomatic efforts to free the ship and crew, keeping Russian, Latvian, Filipino and Indian embassies informed.