Shipping congestion outside the largest U.S. gateway for imports from Asia showed signs of easing over the past week, as dock workers made progress in reducing by nearly half a backlog that peaked at 40 vessels six weeks ago. 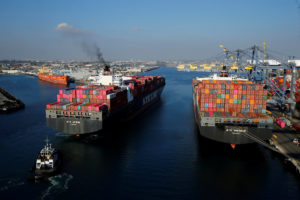 Twenty-two container ships were waiting to unload at the adjacent ports of Long Beach and Los Angeles as of Sunday, down from 29 a week earlier, according to officials who oversee shipping traffic in Southern California’s San Pedro Bay. Thirteen more are scheduled to arrive over the next three days, nine of which are ready to drop anchor.

The average wait for a berth was 7.6 days, a minimal change from 7.5 days a week ago, according to the Port of Los Angeles.

China to become the largest offshore wind market by 2029

U.S. Navy ship rescues Iranian sailors who had been adrift for eight days