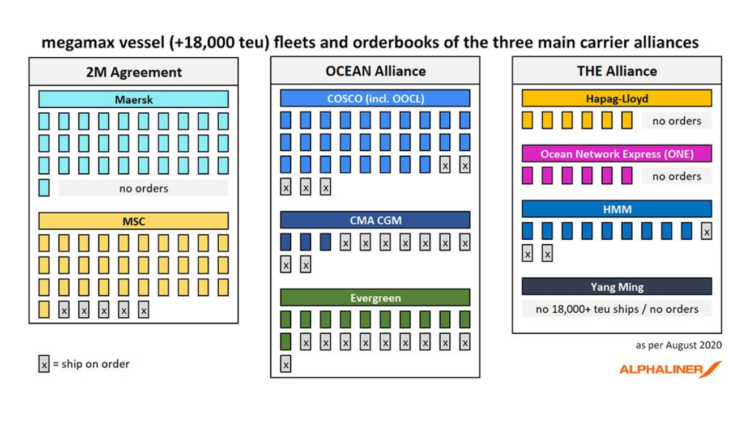 The Load Star – Despite the containership orderbook at an historic low, the top carriers have a backlog of 86 ships of over 10,000 teu stemmed for delivery over the next two to three years.

The orders were placed before the pandemic stunted global growth, but with considerable uncertainty over the speed of a recovery against the recessionary background, the deployment of 1.47 million teu of capacity on the newbuild ULCVs could prove challenging.

And Alphaliner notes that the outstanding orders are “unequally spread among the three big alliances”.

“The two carriers with the largest orders, CMA CGM and Evergreen, belong to the Ocean Alliance, which already has a market share of 39.5% on the transpacific and 38.7% on the Asia-Europe trade,” said the consultant.

Along with Cosco (OOCL) the alliance has 57 ships under construction with a total capacity of 1m teu.

THE Alliance members Hapag-Lloyd, ONE, Yang Ming and HMM have 24 ships on order, with a capacity of 349,000 teu, while 2M partners Maersk and MSC have five 23,650 teu vessels still to be delivered, all ordered by the latter.

Alphaliner says the deployment of 57 extra ships within the Ocean Alliance network will be “a challenging task in times of expected low growth demand”.

To mitigate the influx of new tonnage it said CMA CGM and Cosco (OOCL) had the option of returning around 15 8,000-10,000 teu chartered-in vessels by the end of next year. But, it added, the redelivery prospects for Evergreen were “marginal”, given the length of the Taiwanese carrier’s charters.

“The 2M is in a much more comfortable position, with Maersk having no outstanding orders and MSC having only five ‘megamax 24’ ships under construction,” said Alphaliner.

Indeed, Maersk’s CEO Soren Skou said yesterday the carrier had “no plans” to order any new ships, given the “material uncertainties” and “lack of visibility related to global demand”, and was focused on reducing capital expenditure.

Alphaliner said the delivery of the 86 newbuild vessels was “expected to put extra pressure on the Asia to Europe trade, as the biggest ships are expected to be deployed there”.

For example, CMA CGM is scheduled to take delivery of nine LNG-powered 23,000 teu vessels from next month, which it will deploy on its FAL1 loop – dubbed the NEU4 string of the Ocean Alliance – which will replace the 16,000-18,000 teu units currently deployed.

The arrival of this additional capacity as the industry hits its seasonal slack season will test the resolve of the carriers to continue with their successful blanking programmes.

In order to fill the extra slots, and assuming growth remains lethargic, the Ocean Alliance members may decide to try to increase their market share. Maersk’s CEO said yesterday the carrier was not looking to increase its market share, but the top-ranked liner will no doubt want to protect the share of the trades it currently commands.

ECUADOR: Expansion and dredging of the dock at the Terminal Portuario de Guayaquil