More than 40 cargo ships with tens of thousands of containers aboard were lined up waiting to get into the ports of Los Angeles and Long Beach this week in a new sign of unyielding backlogs that are hampering U.S. importers at the country’s main trade gateways.

A surge in shipping volumes that began in late summer and rose during the holiday season has continued into the New Year as retailers and manufacturers try to rebuild inventories that were depleted at the onset of the Covid-19 pandemic. The neighboring Southern California ports, which together handle more than a third of all containers coming into the U.S., have seen record numbers of boxes even as dockworkers have struggled to cope with the rising coronavirus cases in the state.

“Huge numbers of medical supplies keep on coming along with furniture, appliances, construction material, landscaping, hot tubs and anything related to the outdoors,” said Mario Cordero, executive director at the Port of Long Beach. “The Americans that have not been impacted by Covid will continue to spend and the surge could go on through late spring.”

The backlogs have left many retailers waiting weeks for goods stuck on ships at sea or at the port, hitting small and medium-size companies with lean operations particularly hard.

“There’s been all kinds of supply-chain problems affecting us directly for the past year,” said Abbie Durkin, the owner of Palmer & Purchase women’s clothing and accessories shop in Rye, N.Y. “We had a popular sweater that we had pre-sold which was coming in from a vendor in Los Angeles who imported from China and with the bottlenecks it never came through. …It was a big hit.”

The peak season for liner ships usually starts in late August when Western retailers start stocking up for the year-end and eases in November before coming to a near standstill at the Lunar New Year holiday in February, when China’s factories close for about 10 days.

But this year the import surge started in early summer, stretching supply chains as China’s export engine heated up and Western retailers scrambled to restock following coronavirus lockdowns in the spring.

Los Angeles and Long Beach handled 909,021 inbound containers in October, more than double the number the ports saw in March, at the outset of the pandemic. The Pacific Merchant Shipping Association, which represents ship operators that serve the West Coast, said about a quarter of all inbound containers waited more than five days on docks to be delivered to customers in October and November, compared with between 2% and 4% in the first half of 2020.

Monthly inbound container volume, in 20-foot equivalent units, into the ports of Los Angeles and LongBeach over the past two years. 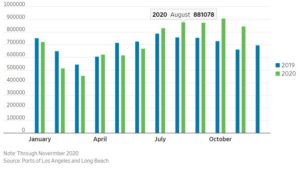 “We are all stretched very thin, whether it’s warehouse workers, truck drivers, or longshore workers,” said Gene Seroka, executive director at the Port of Los Angeles. “Storage facilities are full and have staffing issues, because of social distancing and this extends to the trucking community and the docks.”

Employers at port terminals are undertaking strenuous testing for Covid, officials said, and taking an hour’s break between daily shifts to disinfect equipment. At the same time, rising numbers of workers are calling in sick.

“We have serious concerns with the positive numbers we see at the waterfront,” said the Long Beach port’s Mr. Cordero. “There were two deaths alone last week in the San Pedro complex. We are concerned about the labor that will be available going forward because of Covid.”

The Marine Exchange of Southern California, which monitors vessel movements, said 48 vessels were waiting to berth at both ports with 33 being container ships on Monday. Docking delays can stretch to more than five days from an average maximum of two days, with more than 20 ships waiting to dock at each port while there is usually none.

The flotilla of cargo ships offshore now rivals the fleet parked off California during labor disruptions in 2014, when backups from Seattle down to Long Beach rattled the U.S. economy.

The shipping industry is bracing for the surge to continue even through the Lunar New Year next month as China tries to maintain momentum in its recovering economy.

“This is not a typical Chinese New Year because demand is still crazy,” a broker in Singapore said.

The National Retail Federation said in a statement last week that it expects the import surge to continue this year amid shortages of shipping capacity and equipment, including chassis and empty containers. Port officials also see no relief on the horizon.

“Expected ship landings in L.A. until the first week of March will be very strong and upwards year on year,” said Mr. Seroka. “We are in a pandemic buying surge.”