The International Maritime Organization (IMO), the United Nations arm that regulates global shipping, said its London headquarters has been hit by a cyberattack that brought down its website and internal web-based services last week.

The IMO said last Thursday that it was hit by a sophisticated cyberattack against the organization’s IT systems that overcame robust security measures in place, and that their technicians shut down key systems to prevent further damage from the attack.

The IMO headquarters file servers are located in the UK, with extensive backup systems in Geneva. The backup and restore system is regularly tested.

On the other hand CMA CGM  continues to struggle to fully get back on track, with social media posts showing increasing irritation from customers at the limited communication from the French liner.

People involved in the matter said the carrier was investigating an encryption malware attack and that it had been contacted by someone claiming to be a hacker who asked for ransom in return for a decryption key.

The picture below was taken from the screen of a CMA CGM computer showing he ransom request. 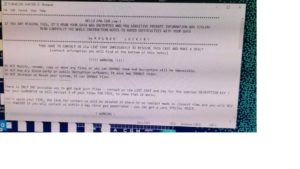 The last update from CMA CGM came on Friday evening.

The company said it was bringing back online parts of its network that include booking platforms after isolating the systems directly affected by the attack.

The company’s worldwide agency network is gradually being reconnected, it said, adding that two subsidiaries – Mercosul and Containerships – are once again fully operational. Other subsidiaries such as APL, CNC as well as the group’s online booking system remain down however.

CMA CGM has just announced it has appointed the former head of IBM France to take on the group’s digital initiatives. Nicolas Sekkaki has been appointed executive vice president IT, digital and transformation.

The apparent attack follows a series of breaches of technology networks in container shipping in recent years.

ECUADOR: Expansion and dredging of the dock at the Terminal Portuario de Guayaquil

COLOMBIA: Incentives in USD to accelerate the Pacific regasification plant