According to Hellenic Shipping News, ship tracks, the polluted sea clouds that follow ships crossing the ocean, are a feature of modern commerce. Like ghostly fingerprints, they trace sea routes around the world, from the North Pacific to the Mediterranean Sea. But in 2020, satellite observations showed fewer of those contamination fingerprints. In other words, fuel regulation reduces air pollution from maritime transport.

Drawing on nearly two decades of satellite imagery, the researchers found that the number of ship tracks dropped significantly after a new fuel regulation went into effect. A global standard implemented in 2020 by the International Maritime Organization (IMO), which requires an 86 percent reduction in fuel sulfur content, likely reduced the formation of ship tracks. Business interruptions related to COVID-19 also played a small role in the reduction. 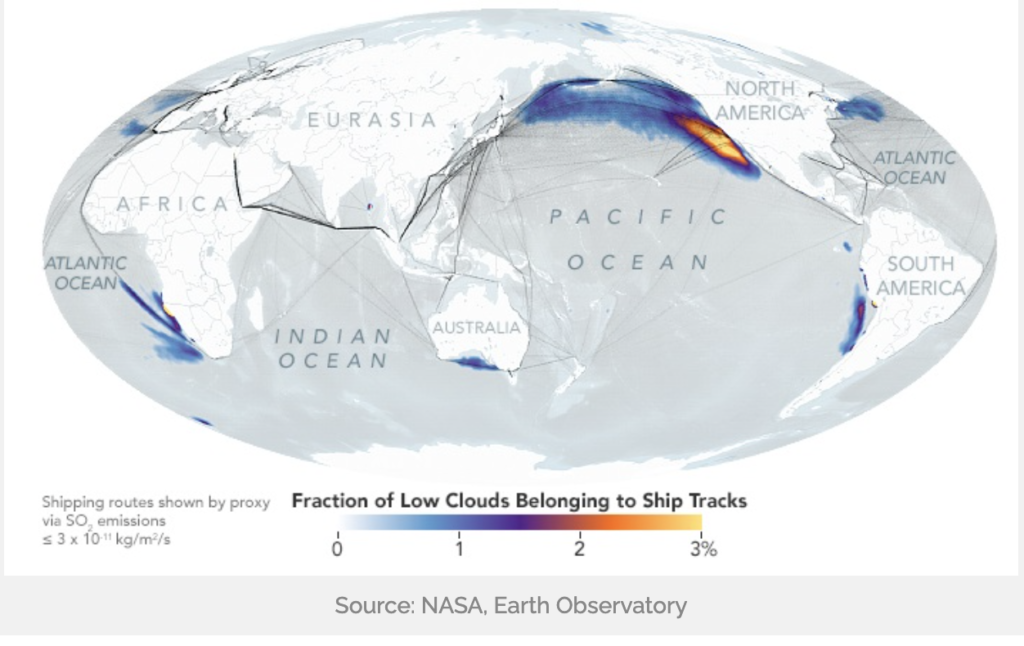 Scientists used advanced computing techniques to create the first global climatology (a history of measurements) from ship tracks. They used artificial intelligence to automatically identify ship tracks across 17 years of daytime images (2003-2020) captured by the Moderate Resolution Imaging Spectroradiometer (MODIS) on NASA’s Aqua satellite. The map at the top of this page shows the density of identified ship tracks between those years, calculated as a percentage of the total low-level marine cloud cover. 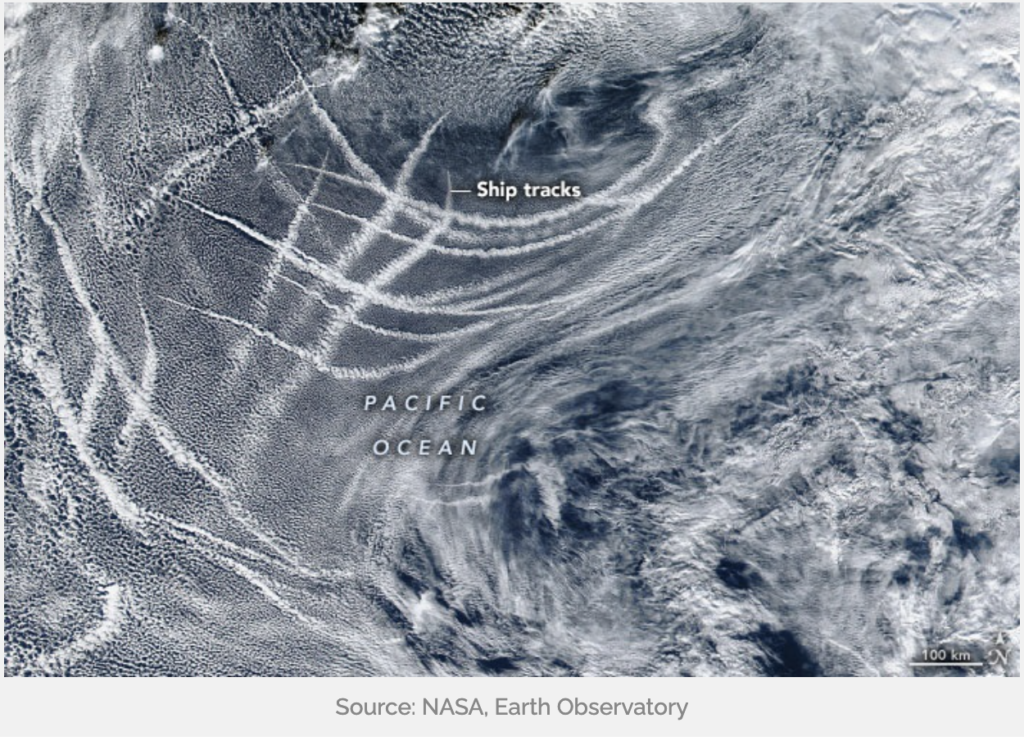 Ship tracks were first observed as “anomalous cloud lines” in early meteorological satellite images acquired in the 1960s. They are formed by water vapor coalescing around small pollution particles (aerosols) in ship exhaust gases. The highly concentrated droplets scatter more light and thus appear brighter than unpolluted sea clouds, which are seeded by larger particles such as sea salt. A criss-cross pattern of ship tracks off the Pacific coast of North America is visible in the above natural color image, acquired on December 7, 2021, with the Visible Infrared Imaging Radiometer Suite (VIIRS) on the Suomi NPP satellite. .

By limiting the sulfur content in fuel to 0.5 percent (up from 3.5 percent), the IMO’s global regulation in 2020 changed the chemical and physical composition of ship exhaust gases. Fewer sulfur emissions mean there are fewer aerosol particles released to form detectable ship tracks.

According to Yuan and colleagues, similar but regionally defined sulfur regulations, such as an IMO Emissions Control Area in place since 2015 off the west coast of the US and Canada, had not had the desired effect because operators they modified their routes and charted longer courses to avoid designated areas.

While analyzing data from 2020, the researchers found that ship tracking density decreased that year on all major shipping lanes. (See map above). Ship-based tracking data indicated that the COVID-19 pandemic played a role in decreasing global maritime traffic by 1.4 percent for some months. But this change alone could not explain the large decline in observed ship tracks, which remained at record low levels for several months in 2021 (the most recent data analysed). The researchers concluded that the new global fuel regulation played a dominant role in reducing ship footprints in 2020. 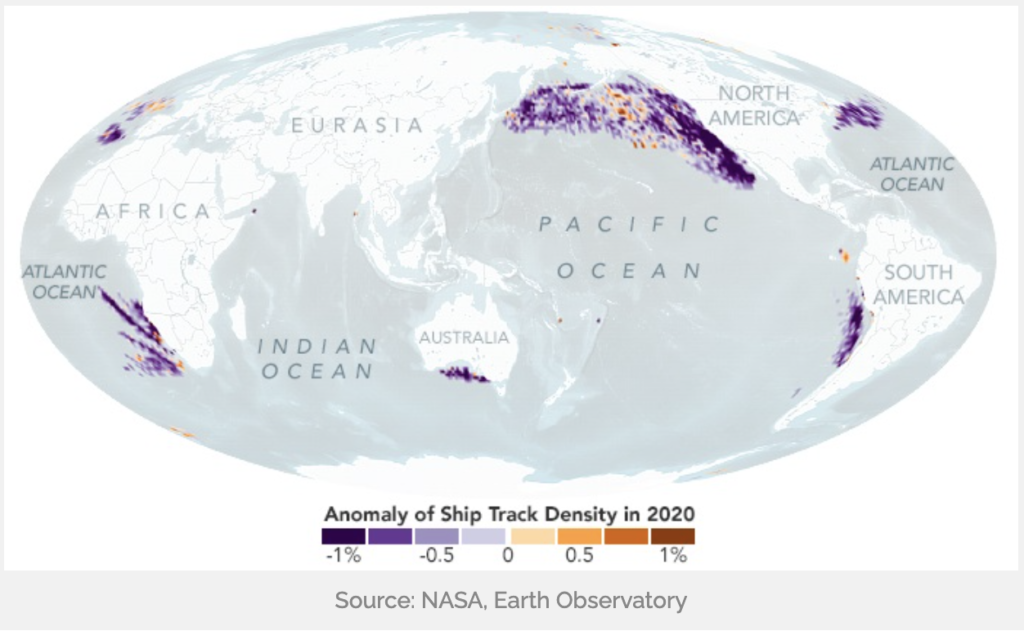 Over the long period of their analysis, Yuan and his colleagues also found that fluctuations in economic activity leave distinct traces in the satellite record. In particular, transpacific ship tracking patterns between Asia and the Americas reflect dips and spikes in trade. As outlined in the study, a general upward trend in shipping activity between 2003 and 2013, reflected in ship tracking clouds, was reversed for about a year after the 2008 global financial crisis. A decline still between 2014 and 2016 probably reflected a slowdown in Chinese imports and exports of raw materials and basic products.

Beyond their importance to global trade, ship tracks can serve as case studies for one element of climate change. “Ship tracks are excellent natural laboratories for studying the interaction between aerosols and low clouds, and how that affects the amount of radiation that Earth receives and reflects back to space,” Yuan said. “That’s a key uncertainty that we’re facing in terms of what’s driving the climate right now.”