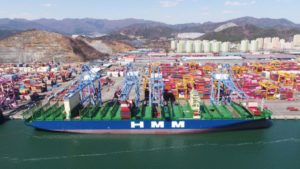 The contract, worth KRW 1.1 trillion (about $1 billion), was signed with an undisclosed European shipowner.

The newbuilds are planned to be delivered by the end of 2024, DSME said in a stock exchange filing.

The shipbuilder has so far this year secured orders for a total of 33 vessels, representing 61.2 per cent of its annual target of $7.7 billion, Yonhap News Agency reported.

British surveillance over the Gulf of Guinea

U.S. Navy in controversy with Russia