By The Colombian Ministry of Transportation 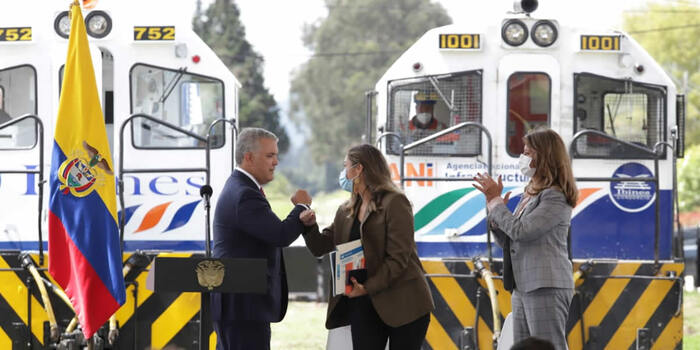 Bogotá DC November 23, 2020. In compliance with what is established for the first time in a National Development Plan, the President of the Republic of Colombia Iván Duque Márquez launched the Railway Master Plan (PMF), which emerges as a tool to enhance the competitive advantages of the way, with a view to increasing the economic, social and productive development of the country. The PMF establishes the technical guidelines and roadmaps for the normative, institutional, regulatory, financing and planning components of projects that contribute to the economic and social development of the country.

Additionally, this plan is part of the actions outlined in the Pact for Infrastructure, with the purpose of coordinating actions in terms of railway operation and infrastructure, establishing agreements with the private sector and boosting the mobilization of cargo that is consolidated over time. .

In his speech, President Iván Duque Márquez highlighted the importance of the PMF “Because the Train increasingly has a complementary function and makes intermodality the progressive function for the country.”

The Railway Master Plan does not have a partisan color, it belongs to everyone since multimodality is an opportunity for our competitiveness with a futuristic vision, added the Colombian president.

The National Development Plan also established, as a goal, to more than double the number of kilometers of commercial operation; going from 420 km to 1,077 in the four-year period. Through joint work with the private sector, this goal was met during the first two years of the current government. And not only was the goal met, but an intermodal cargo mobilization strategy was available: the La Dorada – Santa Marta, La Dorada – Cartagena and La Dorada – Barranquilla corridors have managed to consolidate operations with cargo such as machinery, steel, cement, raw materials, soft drinks, equipment for the oil industry, among others. These operations include, for the first time, in the case of La Dorada – Santa Marta, export and import cargo. Something that did not happen in rail mode in the last 6 decades.

According to the Minister of Transportation, Ángela María Orozco, “We have very important challenges such as structuring and reactivating the operation of the Pacific railroad, also defining the connections of the first and last mile between the train and the seaports and the logistics nodes that allow this interconnected railway network to be made viable, facilitating regional connectivity and, in turn, reducing costs such as environmental emissions that allow us to continue advancing in the pilots for the mobilization of different types of cargo ”.

This plan will be a plan that adjusts to the needs of the development of the railway infrastructure and operation, new projects, required structuring and other elements, he added.

The Vice Ministry of Infrastructure with the ANI, INVÍAS and the National Planning Department with the support of the Inter-American Development Bank worked together in the PMF identifying the problems and the absence of a strategy to reactivate and consolidate the railroad mode in the country, proposing 5 thematic axes that are:

Institutional: which seeks to strengthen the role of each of the entities and establish responsibilities after identifying gaps, defining tasks, coordinating roles and enhancing capacities.

Regulations: Regulatory updating and clear operating rules are required, in addition to guarantees for the private sector regarding continuity, safety and authority in the railway operation (the last general railway Law is Law 76 of 1920).

Regulation: the technical and economic components will define the rules that guarantee competitive, safe access and in adequate operating conditions.

Financing Scenarios: It is intended to define the sources of financing, the strengthening and permanence of the general budget of the Nation, creating article 308 in the PND Law.

Project planning: The plan will define a pipeline of indicative projects, which arise from a process of identifying those initiatives that are already in operation, or have a significant level of structuring, even those that as a preliminary approach have some potential to be developed. However, this plan aims to be dynamic and the new projects that arise will depend on the need and relevance they have from a technical point of view, demand, connectivity, among other factors, as long as they are viable projects.

The preparation of this Railway Master Plan had the cooperation of organizations such as the IDB, with whom the technical document and its supporting studies have been consolidated, in addition to previous cooperation that had been on behalf of the French Development and Development Agency. also of the British government.

The train as part of the country’s economic reactivation

The participation of the train has been taking place even from the very stage of the beginning of the pandemic and its subsequent months, however, in the near future it will also play a fundamental role, considering that the increase in the number of user companies (from 1 to 24 in the last 18 months), as well as the consequent growth in freight transported, will make it possible to boost the country’s productive apparatus, since the train is an efficient way to move large volumes over long distances.

This is why, in this Government, more than 180 thousand tons of cargo have been mobilized, which have allowed the supply of the country in this time of pandemic.

The first wave of the fifth generation of concessions (which is part of the reactivation scenario), as well as the strategy of the so-called Regional Logistics Alliances, which seek to diversify and therefore increase the cargo moved by train, include the railway mode as a key player , as well as the new export and import cargo operations from the center of the country and to the Caribbean Ports, which will result in lower transportation costs, job creation, and increased efficiency in the transportation chain.