According to Alphaliner,  the total capacity of non-cellular ships deployed on regular liner services in August has increased by 21.6%, compared to a year ago.
This might look impressive, but these vessels nevertheless represent only 1.1% of the total container fleet active on liner services.

The deployment of extra multipurpose or general cargo ships in liner trades has not solved the capacity shortage during the past twelve months. Since the average capacity of these ships stands at only 525 teu, their global capacity effect is quite limited anyway and the role that such vessels play on liner services is expected to decrease soon, now that container cargo demand started to ease.

Non-cellular ships have certainly played an increasing role in transporting containers for which no slots were available on cellular ships, but Alphaliner’s tally of non-cellular vessels only includes those which are deployed on regular services.

Alphaliner has excluded ships trading on parcel services, where the port rotation is entirely subject to sufficient cargo inducement.

Vessels carrying forest products and taking additional containers as deck load or taking a container load on a return trip have also not been included in our count.

The same goes for big conro vessels of operators such as Grimaldi or Linea Messina, as these were specifically built for the purpose of carrying – among other cargos – a large number of containers on regular liner services.

Despite the modest role of multipurpose ships on regular liner services, this tonnage was an alternative for newcomers. UK-based DKT Allseas charters a number of non-cellular 23,000 – 35,100 dwt ships with a container intake of 1,400 – 1,900 teu for its China – Bangladesh – Europe ‘China Xpress’ service.

This explains why 12,320 teu of non-cellular capacity is currently deployed in the Asia – Europe trades, up from only 3,025 teu in August last year. The non-cellular fleet on this major East West trade however represents a very marginal 0.2% of overall capacity on the route.

The largest concentration of non-cellular ships (133,200 teu) is found on dedicated intra-Asian services, where operators such as Meratus Lines, Antong Logistics or Samudera deploy a large number of small units on Indonesian coastal or China domestic services.

These three carriers are ranked 3rd, 6th and 9th in our list of the top 10 operators deploying non-cellular ships in liner services.

The number one spot is not surprisingly taken by Swire Shipping.
This carrier not only has an important multipurpose fleet trading in the South Pacific, but also acquired Westwood Shipping Line, which has four 2,048 teu conbulkers trading in a service to and from the Pacific Northwest. 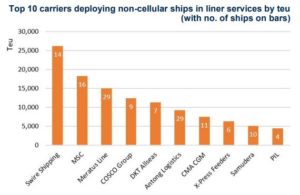 Interestingly, the world’s largest container ocean carrier MSC is now ranked in second place when it comes to non-cellular ships in liner
trades.

These vessels now trade as local feeders in East Africa, along the West Coast of South America and within the Mediterranean.

Container Shipping outlook second half of 2022